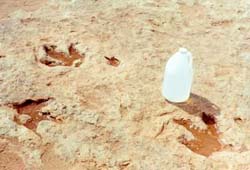 The Tuba City Dinosaur Track Site is located just 5 miles away from the Moenkopi Legacy Inn & Suites. Visitors can explore dinosaur tracks that were left millions of years ago.

The tracks were formed in the early Jurassic period, about 202 to 200 million years ago. Several different types of dinosaurs are represented by their tracks at this site, all of them are carnivores. Fossil footprints, also called trace fossils, are classified not according to what animal created them, but rather by their form, since its impossible to know for sure if two unrelated animals made similar tracks. Based on the age of the rocks and the fossils of carnivorous dinosaurs in the area, it’s likely that animals such as Coelophysis kayentakatae and Dilophosaurus wetherilli made the tracks at the Tuba City site.

The hike is fairly easy and mostly flat; it winds around several stone spires and past hundreds of tracks. There are usually Native American guides hanging out around the site who are willing to guide you around the site and tell you the legends and science behind the tracks.