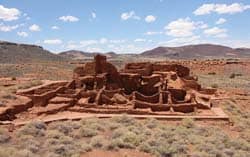 Wupatki National Monument is one of several sites preserving pueblos of ancient peoples. In total there are more than 800 identified ruins spread around miles of desert. All of the pueblos were inhabited by the Anasazi and Sinagua Indians during the 12th and 13th centuries.

The settlement was abandoned in the early 13th century, because the land was too barren and infertile to live on. It is believed that the present day Hopi are descended from the former inhabitants of this region. 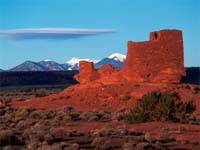 The biggest ruins are the 3-story Wupatki Pueblo (Hopi for ‘big house’) that was once the home of 300 people. The house is situated on the edge of a small plateau and has unobstructed views eastwards towards the Painted Desert and the Little Colorado River. 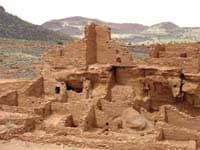 The ruins are reached by a short, paved self-guided trail starting at the visitor center. A leaflet is available explaining the various points of interest; apart from the main building, these include a masonry ballpark – a recreational feature usually only found much further south, and a natural blowhole. This is a vent of unknown depth linked to underground caves which either blows out or sucks in air, depending on the ambient pressure.