Some things to know about Hopi 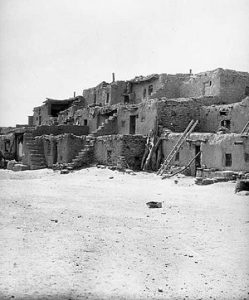 The Hopi population on Hopi land is just under 10,000, occupying 2,439 sq. miles, according to the 1990 U.S. Census. There are approximately 7000 more Hopi people living elsewhere around the world. The Hopi have 12 villages located in three regions: First Mesa, Second Mesa and Third Mesa. While language, customs and traditions are similar, each village conducts its own ceremonies and has features that are unique from others.

First Mesa consolidates the towns of Walpi, Sichomovi and Tewa. Walpi, the oldest and most historic has been continuously inhabited for more than 1100 years dating back to 900 A.D. Walpi stands above the valley at 300 feet, surrounded by awesome vistas of the sky and distant horizons.

After the revolt against the Spanish in 1680, the two other villages were established on First Mesa. The people of Walpi settled Sichomovi village. Hano was originally settled by a group known as the Hano people, who abandoned the site, which was resettled by the Tewa who came from New Mexico.

Unlike the other villages, Walpi to this day does not have running water or electricity.  Residents must walk to Sichomovi to wash and get water. 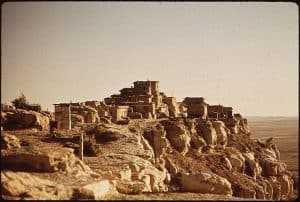 Second Mesa includes the three villages of Shungopavi, Mishongovi and Sipaulovi. Over a thousand years ago, Hopi clans began to arrive at this location. According to Hopi tradition, Shungopavi is one of the first Hopi villages established on Second Mesa.

Shungopovi and Mishongovi villages were originally located below the mesa edges close to their springs. After their involvement in the Pueblo Revolt, the villages moved to a more defensive location on the mesa tops.

Third Mesa is home to the villages of Kykotsmovi, Old Oraibi, Hotevilla and Bacavi. Forty-five miles to the west near Tuba City, is the Hopi village of Moenkopi.

Old Oraibi dates back to 1150 and is probably the oldest continuously inhabited community in the United States. In 1900, it was ranked as one of the largest Hopi settlements, but dissension between two chiefs caused many to leave. Kykotsmovi and Hotevilla were founded in 1906 after the split from Old Oraibi. Bacavi is the newest of all the villages and was settled in 1909 after tensions became unbearable for a Hopi loyalist who left Old Oraibi to settle at a new site.

The Upper Village of Moenkopi is located at the western gateway to Hopi adjacent to the Navajo community of Tuba City.  Chief Tuuvi of Oraibi founded Moenkopi in the 1870’s as a summer farming area, irrigated from nearby springs. Moenkopi is divided into two sections, Upper Moenkopi and Lower Moenkopi.

The Villages of the Hopi are all living villages and ask that out of respect to their culture and privacy visitors do not photograph, video tape, explore in non-designated areas, pick up loose feathers, or use alcohol, drugs, and firearms. Some social ceremonies are open to the public. When visitors enjoy these ceremonies it is asked that they wear appropriate dress and do not discuss the ceremony. To learn more about visiting the villages please click here.

Q: What is the Time Zone on the Hopi Reservation?

Q: Can I drive on the Hopi reservation?
A: Yes, Arizona state highway 264 connects the villages from the western gateway community of Moenkopi to the First Mesa Villages. All of the villages are accessible in private vehicles. However, the best way to experience the villages is on an escorted tour with a certified Hopi Guide who will share the cultural background of the villages and the people. An authorized guide can also take you to restricted areas that are not open to private vehicles.

Q: How far in advance do I have to schedule a guided tour?
A: Tours are usually available for booking on the morning that you intend to tour, however, advance reservations are recommended for full day tours.

Q: What are the average temperatures on the Hopi reservation?

Q: What is the elevation of the Hopi villages?
A: The elevation in the Legacy Inn in the Upper Village of Moenkopi is approximately 4,940 feet (1,506 meters).

Q: Are there rules for visiting the Hopi Villages?
A: Whether you visit during a feast day or take a guided tour, visiting a Hopi village is a unique and memorable experience. The villages are very interesting to see because much of the architecture is hundreds of years old. It is important to remember that these are living villages and when you enter the village you are stepping into someone’s home. Be sure to observe posted regulations; you are subject to the tribal laws:

*Villages are open to the public during some festivals and feast days.

*It is polite to accept invitations to eat, even if you eat or drink only a little.

*Pets are not allowed when touring Hopi land.

*Removal of pottery shards or rocks are prohibited.

*If photos are allowed, purchase a camera permit.

*Please enter a home by invitation only.

*Public restrooms are not available.

Contact the Legacy Inn about observance of guidelines for visiting the villages and to schedule a guided tour.

The TUUVI Travel Center is located at the junction of US Highway 160 and State Route 264 across the street from the hotel.  The Travel Center is named after TUUVI, a prominent Hopi man from the Village of Moenkopi. The neighboring Navajo community of Tuba City also derived its named from this Hopi leader.  The Travel Center offers a gas station, a complete convenience store, discount cigarettes, food for travelers on-the-go, and a locally owned and operated store that features authentic Native American handmade merchandise. 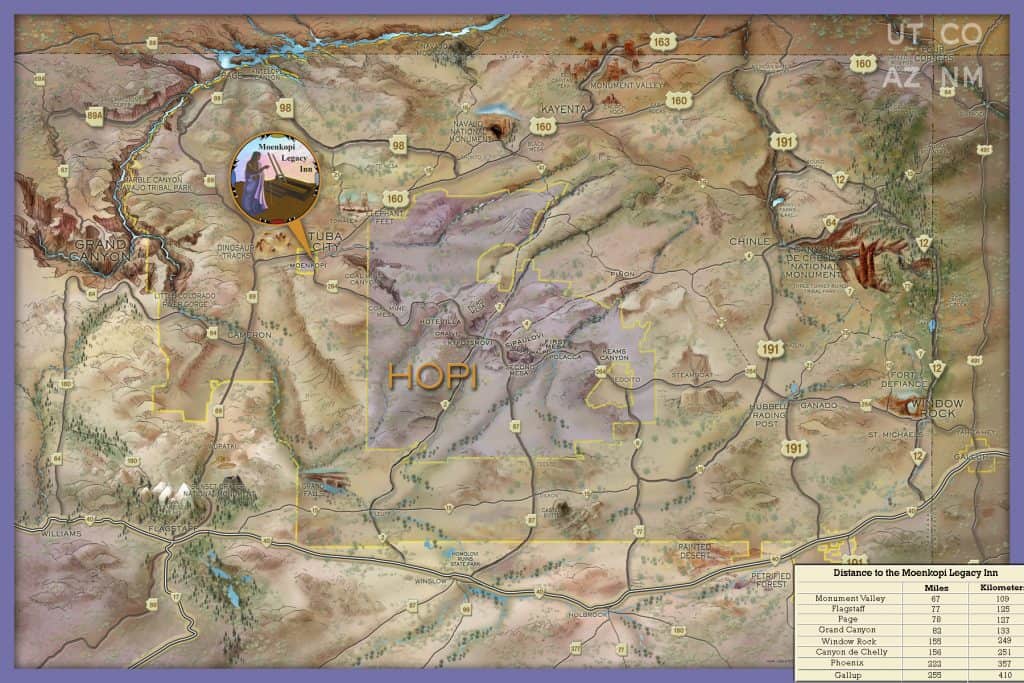